What Teddy taught me about design (Part 1)…. 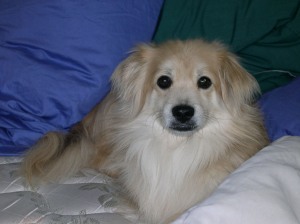 It was a beautiful day in September 2004 when Teddy and I arrived at the inaugural Camp Unleashed at a boys’ camp on the shore of the Stockbridge Bowl in Lenox, Massachusetts. Since there were only 10 “campers” that year we all stayed at an inn in nearby New York State. The inn was a renovated mill, in a pretty valley next to a stream. Dogs were allowed in camper rooms and some of the public spaces at the inn, but NOT in the dining room. So breakfast and dinner were sans dogs.  One evening we were all seated around the dinner table getting to know each other better, discussing our day at camp and our dogs. I knew that my room was directly above the dining room and suddenly we all heard a loud banging sound coming from above. I was a bit embarrassed but explained that I thought it might be Teddy “humping” the pillows on the bed and everyone laughed.  The sound stopped and shortly after Teddy appeared at my feet. We were all stunned. To this day I have no idea how he got there, but I assume he came through the ceiling. When I went back to my room, I found the door locked and the windows were closed and locked too. I did find a rather large hole in the wall under the sink that he certainly could have fit through. There was a suspended ceiling in a room adjacent to the dining room that would have been easy for him to push through.

Teddy came to us as a rescue when he was 8 years old. The animal shelter where we got him said they had tried for days to catch him, but he always managed to escape. It didn’t take long to discover that Teddy was a bit of an escape artist. All of his escapes though, were to find me. If I left him in our fenced in backyard so I could do yard work outside of the fence, he would find a place to squeeze through to get to me. I spent a lot of time figuring out all the potential escape routes that I covered up with rocks, fencing or boards. Teddy taught me the importance of creating tight fencing and where potential weaknesses might be found.

Teddy learned very quickly how to open windows and door locks in the car. The first time this happened I was totally caught off guard. I remember thinking, “oh no he’s going to jump.”  Kiddie locks for windows and doors are handy devices for a dog like Teddy, but this scenario is a good reason to use a crate or restraining device for your dog in the car! Quinn is crated and Lena is harnessed in the back seat.

Teddy was also very good at opening cabinet and closet doors. Teddy taught me that doors, cabinets, drawers, windows, fences and gates in homes with dogs need special attention during the selection and installation process. They should be sturdy, with minimal gaps and strong dog-proof latches! (More specific information on doors, windows, cabinets, fences and gates can be found in “There’s a Dog in the House”)

(As promised the next few posts will be about what my dogs have taught me about design – I have more to share about Teddy, but I do want to give equal time to my other teachers!)

PS: I’ll be doing a workshop on designing homes with your dog in mind at Camp Unleashed in Becket, MA in September, 2011.)